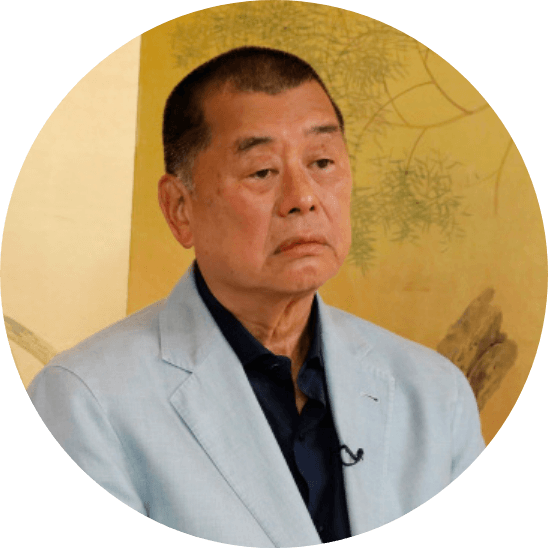 Hong Kong media entrepreneur Jimmy Lai has become a powerful symbol of the struggle to maintain press freedom in Hong Kong as China’s Communist Party exerts ever greater control over the territory. In prison, denied bail, the outspoken critic of the Chinese government and advocate for democracy faces charges that could keep him in jail for the rest of his life.
‍

Born in 1947, Jimmy Lai arrived in Hong Kong at age 12 as a stowaway on a fishing boat. After starting as a child laborer in a garment factory, he rose to manager, eventually purchasing a bankrupt company and launching the clothing retail chain Giordano, where he made his fortune.
‍

After the 1989 Tiananmen Square massacre, he launched Next magazine as part of his Next Media group (which became Next Digital in 2015). Following a critical column in the magazine in 1994, where Lai insulted then-Chinese Prime Minister Li Peng and told him to “drop dead,” China began to force branches of Giordano on the mainland to close, after which Lai sold his share of the company. He launched Apple Daily in 1995, introducing tabloid-style journalism to Hong Kong and later Taiwan, and has openly supported pro-democracy protesters in Hong Kong. Despite Apple Daily’s popularity, many large businesses have shunned the paper in what Lai has described as a politically motivated squeeze. Apple Daily offices and Lai’s home have been repeatedly attacked, including with fire bombs.
‍

Lai was arrested in 2014 when he participated in pro-democracy demonstrations. He provoked China’s ire when, during widespread street protests in Hong Kong in 2019, he met with U.S. Vice President Mike Pence, Secretary of State Mike Pompeo, and House Speaker Nancy Pelosi during a visit to Washington, D.C.
‍

On June 17, Hong Kong’s National Security police raided the office of Apple Daily, confiscating mobile phones and computers with journalistic material and arresting five senior editors and executives under the National Security Law on suspicion of colluding with foreigners.